Your Unite general secretary in action | Fighting for jobs, pay and conditions

Back to the workplace

“I have been elected to do what it says on the trade union tin – fight for jobs, pay and conditions. Now is the time to build strong, effective trade unionism at every workplace.”

Since taking office at the end of August 2021, Unite general secretary Sharon Graham has led Unite from the front, visiting workplaces and taking the trade union to the front line of disputes.

Standing in solidarity with members in dispute at Actavo

Sharon Graham, the leader of Britain's leading union Unite, joined striking scaffolders employed by Actavo at British Steel in Scunthorpe in early December to show ‘steadfast support’ for the workers. 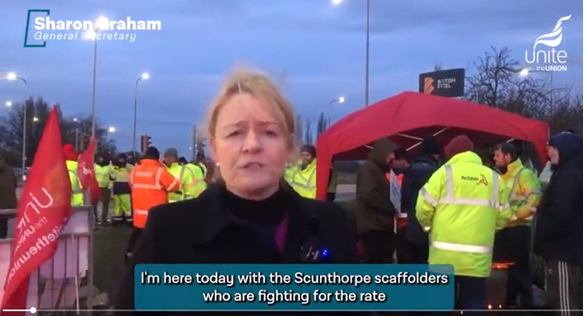 "We cannot allow national agreements to be ignored, both Actavo and British Steel must pay the rate for the job. Unite will escalate this dispute to make sure that workers get the rate." - Sharon Graham, Unite general secretary

Watch Unite general secretary Sharon Graham backing workers at Weetabix: "It's wrong for companies to try and sack workers and then rehire them on worse wages and conditions. This is exactly what is happening at Weetabix.

“Unite won’t accept that, we will use every resource available to defend our members."

And under Sharon Graham, Unite has delivered 100 days of wins in workplaces across the United Kingdom and Ireland. Fighting for jobs, pay and conditions – check out some of the key wins in the first 100 days and to find out more follow @UniteSharon on Twitter.

“We will not sit back and watch as this Government runs down our health service. “This strike vote reflects the fact that ambulance staff have been left with no choice but to take a stand for the very future of the NHS itself.” @UniteSharon independent.co.uk/news/uk/nhs-un…

“This is a landmark decision which has secured the long-term future of the plant. “This announcement vindicates the hard yards that Unite has put in to ensure substantial new investment at Halewood.” @UniteSharon unitetheunion.org/news-events/ne…

“Our members at 2Gether are struggling to make ends meet. But the company is refusing to give these low paid workers a pay rise that reflects rocketing prices, despite being able to afford to. This is not acceptable to Unite.” @UniteSharon unitetheunion.org/news-events/ne…

“Mizkan is a very lucrative multinational company that could easily make a fair pay offer to its workers at the Rochdale factory but it has chosen not to. Mizkan’s actions are all about the greed for profit and not the needs of its workers.” @UniteSharon unitetheunion.org/news-events/ne…