Delivering on Jobs, pay and conditions – one year on

One year on from the election of Unite general secretary Sharon Graham, Unite has ‘won big’ for members – and continues to do so.

Everyone needs better jobs, pay and conditions – and this year has proved to be a year like no other. With our  general secretary Sharon Graham at the helm, Unite has gone from strength to strength, delivering for members.

Unite wants better jobs, pay and conditions for members. Together we can make that happen. It’s never an easy decision for our members to take industrial action. For years bad employers have been taking advantage of our members’ goodwill – especially in the public sector; while in the private sector greedy bosses have put their personal profit ahead of workers’ wages time after time. Many have not had a decent pay rise since 2008. 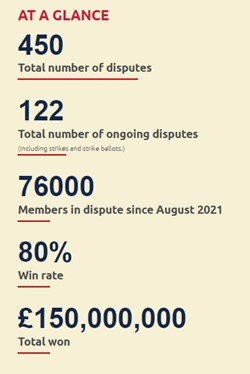 But over this last 12 months things have changed. Encouraged by Unite’s new determination for jobs, pay and conditions’ justice, members have had enough of unfairly low pay and job insecurity and have taken action, supported by the union, to change their situations.

And what a change we’ve seen. Since last August there have been over 450 disputes. Over 76,000 members have been involved in those disputes – and when you consider that’s more people than it takes to fill the Millennium Stadium, Hampden Park, Anfield – or any of the Premier League football stadia – that is quite some number.

But that’s not all – it’s not just the number of disputes that Unite has been involved in. It’s the number of disputes that have been resolved to a level where our members are happy to accept those new improved terms, that really count. Eight out of every 10 results have been a success – and to paraphrase the once famous cat food advert you could almost say, ‘eight out of 10 members’ pay packets prefer it.’

And when it comes to members’ pay, an astonishing amount of over £150m has been achieved. All at a time when the cost of living is rocketing through the roof and inflation rates are so high they have not been seen in over 40 years. Clearly there’s never been a better time to be in Unite – tell your friends and family who haven’t yet joined - join Unite.