Since taking office at the end of August 2021, Unite general secretary Sharon Graham has led our union to deliver some incredible wins for our members. Here are some of the best:

North West Argos lorry drivers: Over 90 drivers based at Heywood depot see their basic rate of pay increase by 31 per cent meaning annual earnings increase from £26,699 to £35,100.

6.2 per cent pay rise for Dartford DHL lorry drivers on Sainsbury’s contract, means at least £2,200 a year for the 200 drivers.

17.5 per cent for Liverpool tanker drivers employed by Turners of Soham, backdated to April 2021, plus a 4.55 percent increase for paid meal breaks.

ensure that the UK’s HGV lorry drivers receive substantial pay rises and improved conditions when they are on road.

Lorry drivers for Imperial Logistics (MINI contract, Oxford) land pay deal worth 27 per cent over two years, plus pay parity on the contract, unsocial hours’ payments, and a lump sum payment of £3,500.

Massive win at offshore contractor Petrofac for 100 workers worth 17 per cent on pay.

More than 50 Loughborough Kinchbus drivers receive increases of between 5.3 per cent and 8.5 per cent.

Kent and Sussex (Stagecoach) sees 500 drivers receive pay increases of between 5 and 6.5 per cent. Drivers at Stagecoach’s depot in Ramsgate also received a pay rise of 5 per cent, while drivers in Canterbury received a 5.7 per cent increase.

Ford workers receive an increase of 5.1 per cent in year one, year two to follow retail price index (RPI).

Over 450 lorry drivers employed by Wincanton (Morrisons distribution, northern England and the Midlands) secure a huge pay increase of between 18-24.4 per cent.

Altrad scaffold workers at the Mitsubishi Chemicals plant, Teesside, win 10 per cent over two and a half years.

Over 200 Teesside Stagecoach workers receive a minimum pay increase of 8.5 per cent. 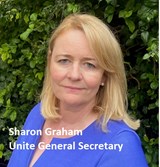 "I have been elected to do what it says on the trade union tin – fight for jobs, pay and conditions. Now is the time to build strong, effective trade unionism at every workplace." - Unite general secretary Sharon Graham