LGBT+ equality in the workplace continues to be hard fought for. Join Unite and Unite Equalities today and help us win equality in your workplace. Many LGBT+ workers face harassment and discrimination based on their sexual orientation and/or gender identity.

Unite Equalities is raising awareness and campaigning for LGBT+ equality, and encouraging LGBT+ workers to join Unite and become active in the union. 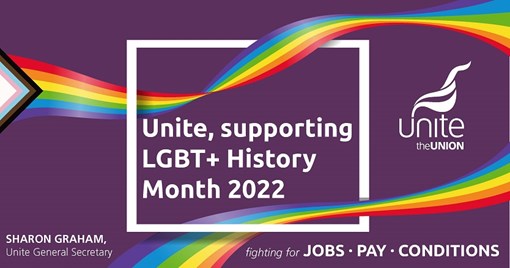 “It’s time to make conversion therapy history”
2022 sees the 50th anniversary of the very first Pride March in the UK in 1972. A popular slogan of the early Gay Rights Movement of the time was “the personal is political”, it doesn’t get more personal than trying to force someone to change who they are through so-called conversion therapy. LGBT+ conversion therapy has no scientific or therapeutic support whatsoever. It is about suppressing a person’s sexuality or gender identity. All too often it leads to mental and emotional damage. It is about attempting to exorcise an integral part of who a person is. It doesn’t work and is inherently abusive. It’s time to make conversation therapy history – It’s time for the government to ban LGBT+ Conversion Therapy NOW.

Standing Up For Workers - A conversation with former bus worker, LGBT+ and community activist Betty Gallacher

Get in touch with the Unite Equalities team where you are .

Happy International Day against Homophobia, Biphobia, Intersex-phobia and Transphobia #IDAHoBIT
⠀⠀⠀⠀⠀⠀⠀⠀⠀
Unite is proud to stand in solidarity with all LGBT+ people across the globe.⠀⠀⠀⠀⠀⠀⠀⠀⠀
⠀⠀⠀⠀⠀⠀⠀⠀⠀
Show your support and share the following on social! 2022 imagery coming soon 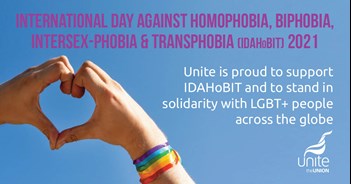 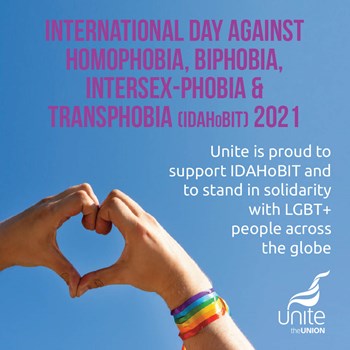 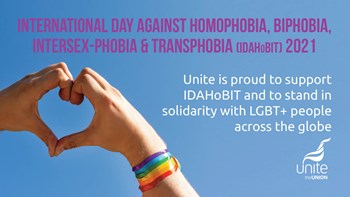