Zoom event: Unite call on International day for the remembrance of the slave trade and its abolition 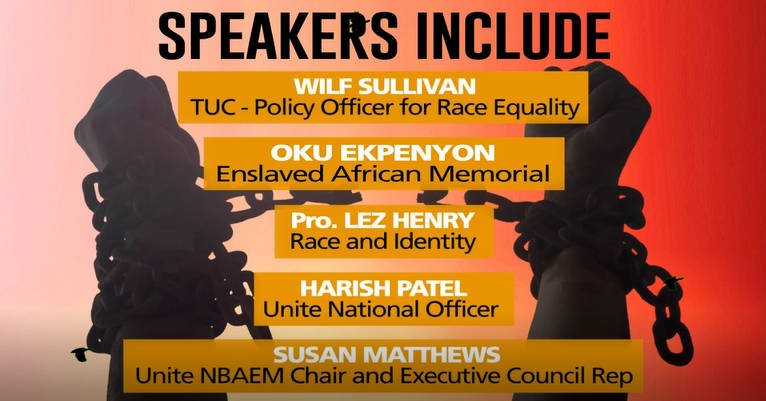 23 August has been designated by UNESCO as the International Day for the Remembrance of the Slave Trade and its abolition. From 1562 when slavery began with the first English slaving expedition setting off by Sir John Hawkins to 1865 when the transatlantic slave trade was abolished, between 10 and 28 million African men, women and children were enslaved, persecuted and their human rights denied.

By the end of slavery millions had lost their lives. The transatlantic trafficking of enslaved African labour resulted in brutal economic exploitation and inhumanity towards humankind. This abominable and shameful period of time was unprecedented and unique in the way that these terrible acts and crimes against humanity took place on an industrial scale and was enforced by European law, which involved and was supported by many major establishments and institutions.

We pay tribute to all those who campaigned – black and white – to abolish the trafficking of enslaved African labour, particularly the enslaved African men and women themselves, former African slaves such as Olaudah Equiano and Ignatius Sancho, white working class groups, parliamentarians such as William Wilberforce and many others.

Unite recognises the legacy and contributions of people of African descent. We fully support the call for a national day of remembrance. We encourage initiatives from the regions to commemorate the International Day of Remembrance of the Victims of Slavery and the Transatlantic Slave Trade.

Unite calls on the government to support the organisation of an annual remembrance day and commit resources for education and raising awareness to mark this high profile event. Sign up for the Unite Zoom event - register online today.

"There is no justification for Wabtec’s disgraceful #FireAndRehire plans. This is an abhorrence – it is undisguised corporate greed and we will oppose it all the way." @UniteSharon doncasterfreepress.co.uk/business/wabte…

"This is a multi-million pound business so it has no business paying Lerwick workers less than port workers get around the UK. Unite is challenging this all the way and our members have the full backing of their union": @UniteSharon @UniteScotland unitetheunion.org/news-events/ne…

How are you coping with the #CostOfLivingCrisis? Have you had to cut back on essential items like food or heating? Tell us your #CostOfLiving story via the link below and help us build for the 18 June London demo. #DemandBetter unitetheunion.org/campaigns/we-d… pic.twitter.com/oIMsUO981I