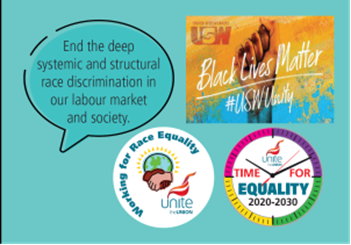 Race equality is a key priority in the workplace and beyond. Unite campaigns for fair treatment for all and recognises the responsibility of everyone in the Union to challenge racism in the workplace, the union and our society.

BAEM workers face higher levels of unemployment and racism at work and Unite Race Forward Campaign action plans are targeted at union reps to support them in tackling racism in the workplace.

We must all work together to promote race equality and ensure that BAEM members continue to play a key role in our union and to increase their involvement at every level.

By joining Unite you too can get involved in achieving this aim.

23 August has been designated by UNESCO as the International Day for the Remembrance of the Slave Trade and its abolition. From 1562 when slavery began with the first English slaving expedition setting off by Sir John Hawkins to 1865 when the transatlantic slave trade was abolished, between 10 and 28 million African men, women and children were enslaved, persecuted and their human rights denied.

By the end of slavery millions had lost their lives. The transatlantic trafficking of enslaved African labour resulted in brutal economic exploitation and inhumanity towards humankind. This abominable and shameful period of time was unprecedented and unique in the way that these terrible acts and crimes against humanity took place on an industrial scale and was enforced by European law, which involved and was supported by many major establishments and institutions.

We pay tribute to all those who campaigned – black and white – to abolish the trafficking of enslaved African labour. Unite calls on the government to support the organisation of an annual remembrance day and commit resources for education and raising awareness to mark this high profile event.

⭐️ New on UniteLive: “We must stand together united' Unite observes Holocaust Memorial Day - and highlights the difference that 'ordinary people' can make in fight against hatred and intolerance. #HolocaustMemorialDay Read here ⬇️ unitelive.org/we-must-stand-…

Strikes scheduled for next week by Abellio London bus drivers are set to go ahead, in the long running pay dispute. Workers will stage further walkouts on 1, 2, 3 February. #JobsPayConditions Read more ⬇️ unitetheunion.org/news-events/ne…

“Jeremy Hunt’s ‘With one leap Jack was free’ economics are fanciful and will not work. Tax cuts for profiteering billionaires won’t reverse the national pay cut, save the NHS, revive British industry or avoid Austerity mk 2.” 1/2 unitetheunion.org/news-events/ne…

Today we commemorate #HolocaustMemorialDay Unite will be remembering and reflecting on the Holocaust and other genocides around the world #HMD2023  #uniteequalities #WeRemember #HolocaustRemembranceDay pic.twitter.com/uSUYWukbJQ

"Energy workers' pay is lagging well behind the eye-watering profits being made across the sector. Yet, Drax Hydro workers have been offered what amounts to a significant real terms wage cut, this is totally unacceptable." @UniteSharon bbc.co.uk/news/uk-scotla…