Unite the union can today (27 July) confirm that its local government membership in 26 councils have rejected the ‘derisory’ 2 per cent pay offer and voted for industrial action.

Unite can confirm that the following 26 councils are now set to be hit by industrial action:

Unite’s members employed by Tayside Contracts have also voted in favour of industrial action which will result in schools in Perth and Kinross Council now being impacted.

The trade union which represents thousands of local government workers balloted its members in schools and cleansing across all Scottish councils.

Unite has repeatedly warned both the Scottish Government and the Convention of Scottish Local Authorities (COSLA) that the current 2 per cent offer is unacceptable amid the deepening cost of living crisis with inflation soaring to 11.8 per cent.

Unite has welcomed movement by COSLA in calling for a higher pay offer of 5 per cent if the Scottish Government allocates extra cash to fund an improved pay offer. However, the trade union is demanding that council leaders fight harder for a fairer share for local government workers.

Unite general secretary Sharon Graham said: “The message for both the Scottish Government and COSLA is crystal clear: thousands upon thousands of members won’t tolerate real terms pay cuts anymore, and they have had enough. Our members are being forced to take this action due to a derisory pay offer, and we will support them in this fight for better jobs, pay and conditions in local government.”

It is reported that more than half of Scotland’s 250,000 council workers are earning less than £25,000 a year for a 37-hour week. Unite previously warned all new council leaders if they do not act to improve pay, they will see strikes this summer.

Wendy Dunsmore, Unite industrial officer, added:  “Our members are at the end of their patience. They are being forced to take this action due to being completely undervalued despite working throughout the pandemic. Let’s be clear here: a 2% pay offer when the broader cost of living is at 11.8% is a punishing real terms pay cut. In the coming weeks we will now plan for targeted strike action in 26 councils across Scotland and the blame for this lies squarely with COSLA and the First Minister.”

Local government emerged as the biggest loser from the latest Scottish Government spending review with its funding frozen for the rest of the parliament. 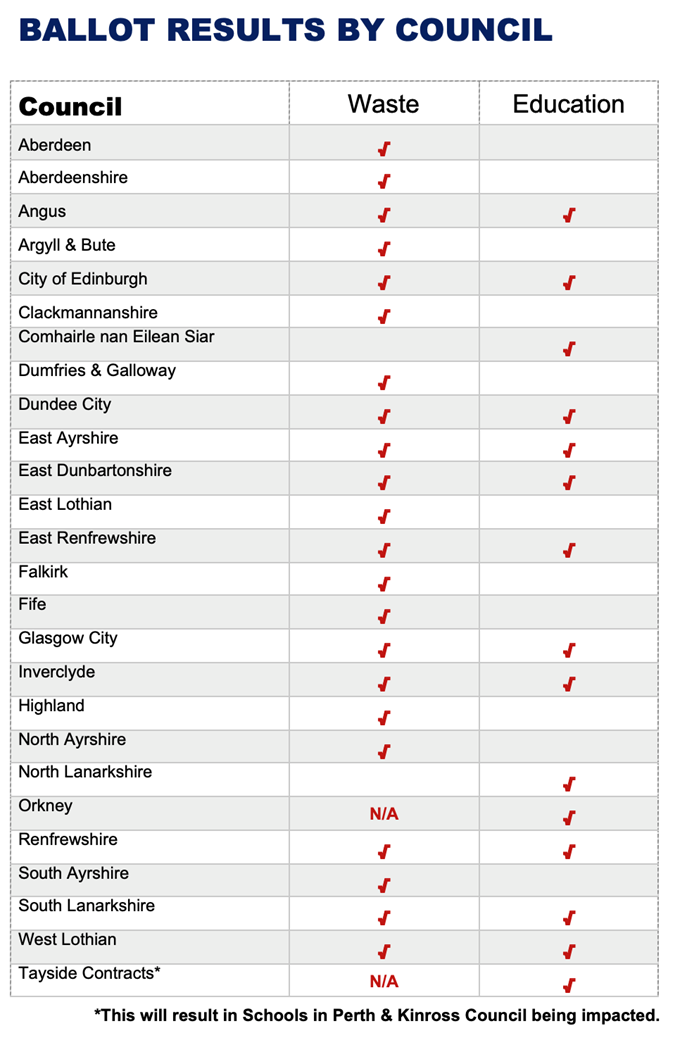