Amid mounting concern about shortages of goods in the run up to the busy Christmas period, an exclusive poll for Unite by Survation issued today (Thursday) finds 56 per cent of the public believe employers should pay lorry drivers more. 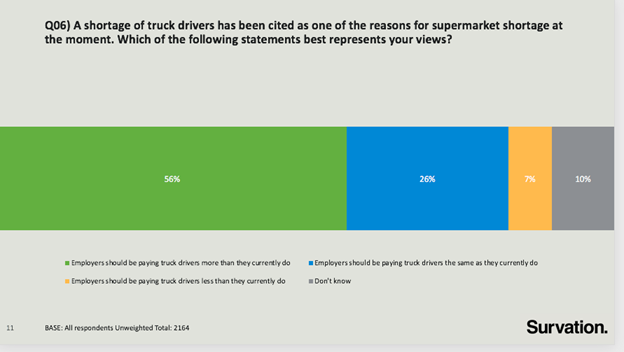 The polling, undertaken by Survation for Unite the union, which represents tens of thousands of lorry drivers, also finds that more people, 48 per cent, blame the government for food shortages, with only 14 per cent blaming supermarkets, and 14 per cent the truck drivers. 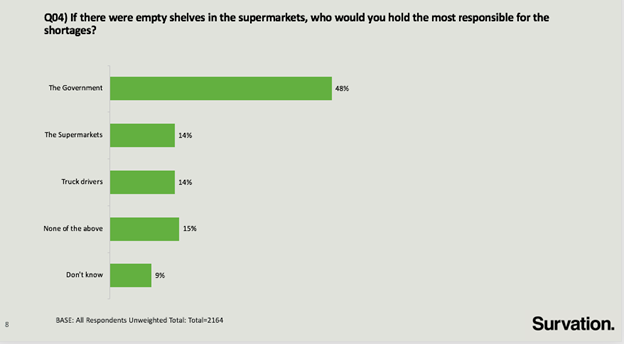 The public believes a combination of factors, COVID-19, Brexit and low pay are all  significant factors in the shortages being seen in supermarkets. 57 per cent believe low pay for truck drivers is a significant factor. Among Conservative voters 53 per cent share this view while among Labour voters it is 60 per cent. 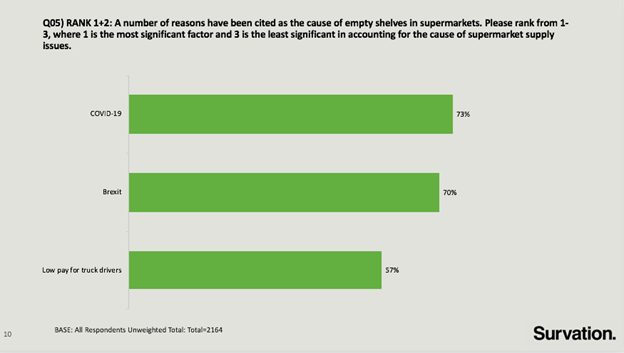 Public ahead of government

Unite general secretary Sharon Graham said: "This poll seems to show that a considerable section of the public are ahead of the government and the employers on the lorry drivers' crisis.

“Like Unite, the public recognise that providing decent jobs, on decent pay, for lorry drivers, would attract more workers to the industry. That would be a starter for 10 in beginning to deal with the current crisis. Years of suppressing drivers’ pay and bypassing European regulations have led us to where we are now”.

The poll comes following the government's recent announcement that the extension to drivers' working hours will continue into 2022, a move described by Unite as `dangerous' and quite probably illegal.

Commenting, Adrian Jones, Unite's national officer for said: "This is confirmation that most people in this country are coming across shortages on our supermarket shelves.

"They believe that the chronic low pay for the lorry drivers who’ve kept our country going during the pandemic is one of the key reasons.

"The majority of the country, including the majority of Conservative voters, say truck drivers must be paid more. It’s high time that government and the supermarkets got together with Unite to make sure that they are.

"The government cannot solve this crisis by making fewer drivers work ever longer hours.  The public is blaming them for the shortages on the shelves so reckless, legally dubious, quick-fixes that make our roads more dangerous just don't cut it.

"And the industry cannot shirk its responsibilities on this either.  There's no shortage of trained drivers in the country but there is a shortage of drivers who want to work miserable hours for stingy pay with all the pressure of being on the road.

"Short-term cash bonuses are no substitute for decent pay and pensions.  The industry has to face up to the true causes of this crisis - its decades-long race to the bottom - and work with Unite to address this once and for all."

Unite's Totally Trucked Off campaign will launch in the autumn to improve drivers' pay in the longer term to restore its value, and to press for better treatment and conditions for drivers while on the road.

Notes to editors: Unite is the leading union in the UK and Ireland dedicated to defending and improving members' jobs, pay and conditions.  The general secretary is Sharon Graham.

For media queries only contact Barckley Sumner on 07802 329235 or at [email protected]
Further information:  The polling was carried out by Survation for Unite the union.

“Employers everywhere would do well to match @TWI_Ltd's forward thinking in recognising the importance of union recognition as a significant element in company development.” @UniteSharon unitetheunion.org/news-events/ne… pic.twitter.com/NG4YpDpdqy

“By taking their legal break, [HGV drivers] will highlight that nothing is being done to address the dreadful employment conditions in a sector that’s at the heart of our economy.” – Unite's Tony Woodhouse. #TruckedOff #DriverShortage morningstaronline.co.uk/article/b/unit…

The antics of the Conservative party today have been a disgrace. They have colluded to stand on the side of bullying bosses and against the interests of workers, showing their real colours. Their hypocrisy was on full display for all to see.” @UniteSharon unitetheunion.org/news-events/ne…

"Nine out of ten members on an extensive ballot voted for strike action on @StagecoachNE's miserable offer. The Stagecoach board should understand that Unite is ready for a relentless campaign." @UniteSharon unitetheunion.org/news-events/ne… pic.twitter.com/mc3vgHU7ut