WHEN: Wednesday 1 December, and then 6-18 December 2021
WHERE: 25 towns and cities across Northern England and the Midlands (see note to editors for full details), first stop Dewsbury

Unite Community members are to tour 25 ‘Red Wall' seats in the run up to Christmas to highlight the increasing hardship caused by chancellor Rishi Sunak's £1,040 a year cut to Universal Credit, a move which according to research (Joseph Rowntree Foundation) has pushed 500,000 families, including 200,000 children further into poverty.

Unite's members will be holding street stalls to call on Tory ‘Red Wall’  MPs to support their constituents' efforts to restore the £20 a week snatched back by the chancellor in October and extend it to all claimants.

The tour comes amid increasing reports from foodbanks that they cannot meet demand, which has jumped since the £20 per week and the furlough scheme were ended, and with the country in the grip of a cost of living crisis that has seen energy and other prices climb.

Unite general secretary Sharon Graham said: "Unite is committed to protecting the incomes of our members, including those not in work, because when households suffer, communities suffer.  The country is in the grip of a cost of living crisis, but with those on the lowest incomes feeling this most sharply, they need that £20 that was snatched back in October handed back now.

“Every one of the seats Unite's members will visit is represented by a Conservative ‘Red Wall’ MP so we're calling on them to use their place in this government to reverse a cut that is causing real pain to the people they were elected to represent and protect."

In Dewsbury, the first stop (Wednesday 1 December), one in four families at least have been hit by the cut to Universal Credit with the tour moving on to other hard hit seats, including Redcar (26 per cent), Birmingham Northfield (30 per cent) and Bolton North East (30 per cent).

Steve Turner, a Unite assistant general secretary heading up Unite's community members division, added: "MPs from Dewsbury to Redcar and across to Birmingham and Bolton could make all the difference to their constituents, many of whom were in a desperate situation even before the £20 uplift was introduced.

“Its callous removal at that time would have been disgraceful, but to do so now, when energy costs and inflation are soaring, will force many more to turn to already stretched foodbanks as they’re pushed even further into poverty.

"Insulting the poorest in society by shouting about the pennies extra working claimants can keep as a result of miserable changes to the Universal Credit taper rate will not keep food on the table nor homes warm.

“It won’t pay the rent nor clothe children and for those unable to work it is meaningless.  The payment of an extra £1,040 a year was a life-saver for millions and its removal shames our nation.

"Our call to these 25 Tory MPs is put your people and communities first. Speak out with them to reverse this miserable cut. Nobody elected you to cause your constituents misery and your failure to support them will not be forgotten by them or by a wider more caring society watching on”.

Unite has been campaigning to protect the £20 pandemic payment for Universal Credit claimants and for it to be extended it to those on legacy benefits too. 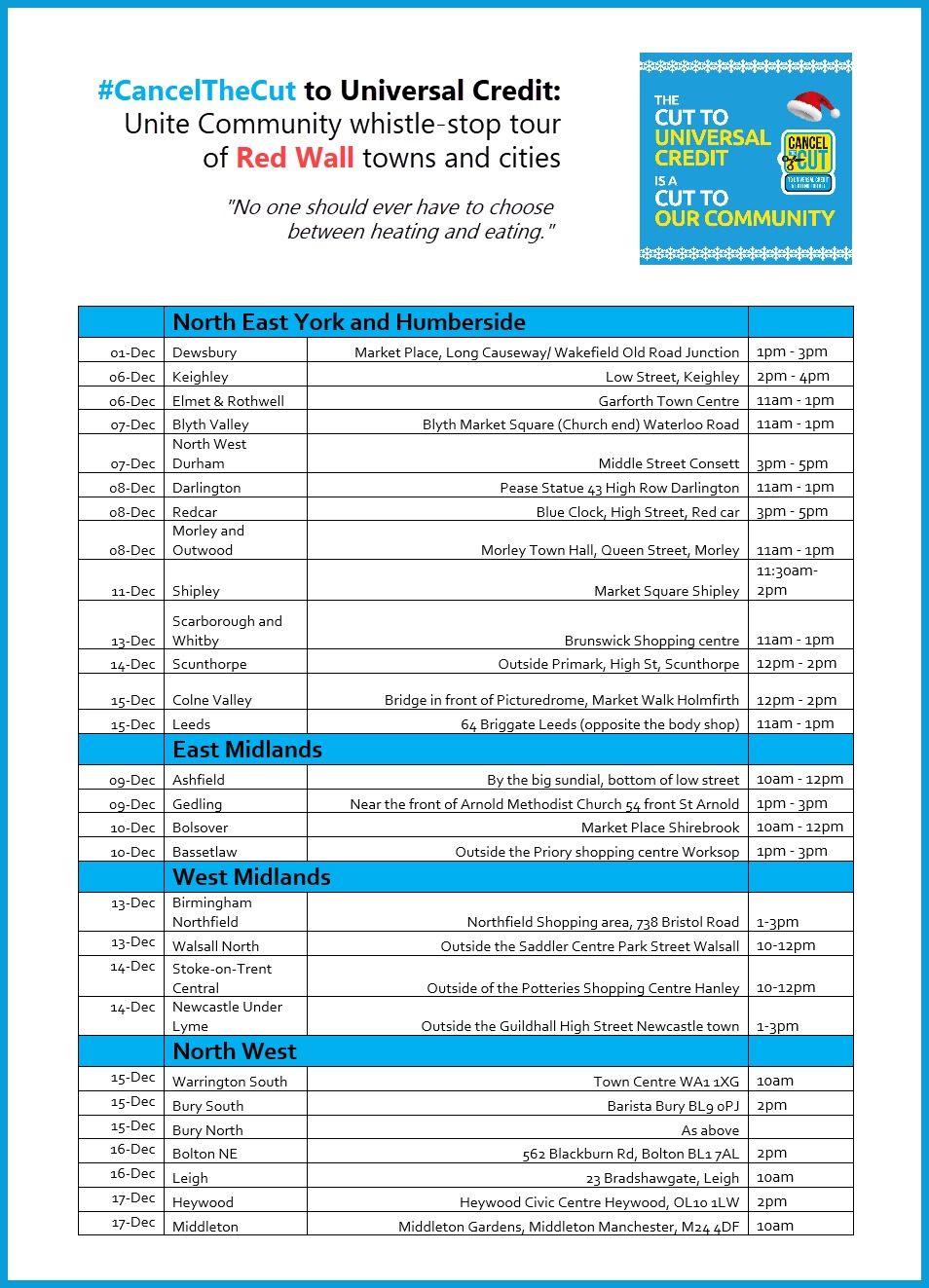 Unite welcomes decision by #Sainsburys to pay its low paid staff at least £10 an hour – but reminds company the increase is still too low to keep up with the sharply rising cost of living. Via @UNITElive unitelive.org/sainsburys-wag…

Unite calls on peers to put NHS patients and staff before private sector in bid to halt assault on NHS in England. Union makes clear opposition to #HealthandCareBill but backs Lords' amendments to lessen worst impacts. Via #ScrapNHSBill Via #UNITElive unitelive.org/health-and-car… pic.twitter.com/CZ942kZsRA

“I hope this overwhelming vote for more strike action in 2022 will focus minds and spur the management into action to resolve this dispute.” @UniteSharon #PayTheRate @UnitedScaffs morningstaronline.co.uk/article/britis…

Staff at Regina Coeli House in Northern Ireland are fighting for their jobs and to keep this vital service for vulnerable women open. Please back their fight. Sign the petition to keep Northern Ireland's only women-only hostel open 👇🏽 megaphone.org.uk/petitions/keep…