Passengers on Go North West’s ‘rogue bus service’ are being forced onto dangerously overcrowded buses, risking their health and all residents in Greater Manchester. 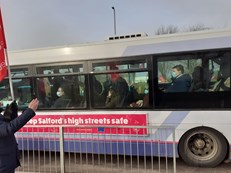 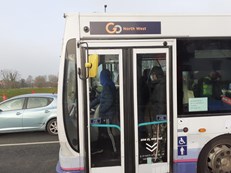 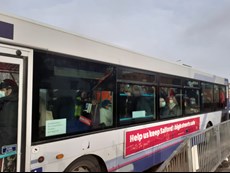 Over 400 members of Unite, the UK’s leading union, are currently on all out strikes, after Go North West, brutally fired and rehired the workers and forced them onto inferior pay and conditions. The workers who currently earn on average £24,000 a year, will be £2,500 a year worse off. The strike action began on Sunday 28 February.

Rather than return to the negotiating table and seek an agreement to avoid strike action, the company decided to instead operate a ‘rogue bus service’.

It has moved many of its buses out of its Queens Road depot and is also using buses supplied by non-union companies including Selwyns and Belle Vue coaches. The company is also bringing in drivers from many other parts of the country, including Cumbria, to driver its ‘rogue service’.

Last week Unite wrote to Andy Burnham the mayor of Greater Manchester raising serious concerns about Go North West’s ‘rogue bus service’, raising issues about the lack of driver safety screens, bringing in drivers in from outside Manchester and overcrowding. Unite warned that all these matters would increase the transmission of Covid-19 in Greater Manchester.

Unite has now obtained a series of photos and videos of serious overcrowding on Go North West’s ‘rogue bus service’. The pictures were taken on the morning of Wednesday 3 March.

Under the rules established in Greater Manchester to help prevent the transmission of Covid-19, single decker buses are restricted to 18 passengers, with no one allowed to stand. The evidence obtained by Unite, reveals that there were up to 44 people on just one bus being operated by ‘the rogue bus service’ many of whom were standing.

The concern about the transmission of Covid-19 have been further heightened as a mutation of the Kent variant of Covid-19 has been discovered in north Manchester, necessitating mass testing in several areas.

“Just days after the launch of the ‘rogue service’ those warnings have been proved to be all too true.

“Rules preventing overcrowding are there for a reason and yet Go North West has chosen to ignore them.

“This is now a public health crisis and local politicians in Manchester must act immediately to ensure that the rogue bus service is suspended immediately and does not resume until measures are introduced to prevent the public health of everyone in Greater Manchester being placed at risk.

“The safest alternative and the most sensible solution, would be for Go North West to cancel its fire and rehire policy, allowing fresh negotiations to take place. Bus drivers could then return to work and a safe service could resume.”

“It was Go North West that walked away from negotiations in January and it is in their hands to return to the negotiations and end the danger now faced by its passengers and local residents.”

Unite has agreed to a million pounds of savings at Go North West’s depot and in addition has agreed a pay freeze for 2020 worth an additional £200,000, it was prepared to continue to negotiate to find further savings but the company walked away from talks in January and instead instituted a brutal fire and rehire policy.

Unite members employed as bus drivers by Go North West recorded an 82 per cent vote in favour of strike action.

📢 Tomorrow ‼️ Our Collective Voice explores how shorter working time can protect skilled jobs and provide a route out of the crisis. Speakers include @AndyMcDonaldMP @CadThomas @ianwaddell_CSEU and @yyydelilah41 Join us Wednesday at 7pm via this link 👇 facebook.com/events/4389115… pic.twitter.com/N4yWTSQGrK

"Our members welcome this small step toward the full reopening of their sector, but they have understandable worries that employers cannot always be relied upon to fairly implement necessary measures" – Dave Turnbull @FairHospitality unitelive.org/hospitality-is…

Unite warns Amazon against using anti-union tactics and urges commitment to declaration of neutrality amid campaign to give workers a real voice. unitelive.org/unite-warns-am…

"We want to build links with the army of non-unionised, unorganised workers from the Turkish and Kurdish communities. These workers have been hit particularly hard by the pandemic" – Onay Kasab @UniteLondonEast @daymercentre unitetheunion.org/news-events/ne…

In a letter to housing secretary Robert Jenrick, the leaders of Unite, Unison and GMB as well as tenant groups contrasted the government’s generous financial support for landlords with its failure to give renters adequate protection from homelessness ⬇️ morningstaronline.co.uk/article/b/prot…