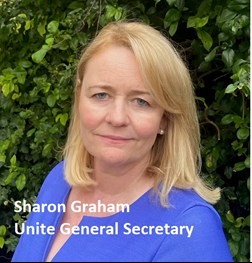 Sharon Graham has introduced radical changes to the way the union operates to focus its entire resources on winning for workers.

The strategy is already bearing fruit. In Sharon Graham’s first 100 days in office Unite has won pay increases worth over £25 million in new pay deals. That amounts to a quarter of a million pound of wins every day she has been in office. (A list of key wins is included here).

Unite general secretary Sharon Graham said: “Unite is now dedicated to doing what it says on the trade union tin - fighting for jobs pay and conditions. Unite reps and officers across the UK and Ireland are making that a reality.

“The pay deals won for Unite workers in my first 100 days are a cast-iron confirmation of that. We are winning better deals for Unite members and we intend to continue to do just that for the next 100 days and beyond.”

The clear commitment for Unite to defend the jobs, pay and conditions of its members has resulted in the union being involved in a record number of industrial disputes, over recent months. In Sharon Graham’s first 100 days over 40 industrial disputes have been resolved (See Media Briefing in Notes below).

A dedicated disputes unit has been established to assist members, to ensure that they have all the information and support that they need to ensure that Unite always secures the best possible outcome in its disputes. This unit will triple in size in the coming months.

Sharon Graham said “From the first day of my election I said I was going to focus Unite on getting back to the workplace, that the days of the political dog wagging the union’s industrial tail were over.

“I have set up a special disputes unit within the current union structures to make sure every step is taken to win disputes for our workers. This is a new, powerful response to what needs to be done to lead the union fightback across the UK and Ireland”.

Unite recognises that there are great challenges facing the trade unions. It is no co-incidence that the falling share of wealth going to workers across the UK and Ireland has been matched by the decline of collective bargaining and the drop in membership of unions. The number of workers organised by unions has dropped by half since the turn of the century. However Unite’s leader believes today’s circumstances present an opportunity to make sure workers do not pay the price of the pandemic.

Sharon Graham said: “I believe this is a moment of opportunity for the trade union movement. We must grasp it. Building a powerful union capable of winning disputes and workplace battles is the best protection that I can offer my members through the pandemic and as the country deals with its aftermath.

"The union grows by winning. It is our aim to keep winning so that ‘fire and rehire’ strategies will be confounded and workers don’t pay the price of the pandemic”.

100 days of winning for bus drivers;

100 days of winning for lorry drivers;

100 days of winning for workers.

Workers in dispute: 32 out of the 43 pay deals were won through disputes (74 per cent) where votes for strike action or strikes forced employers to offer improved deals;

Workers are winning back money lost during Covid (including pay freezes).

Thank you Angela for your support and solidarity with our First Manchester members on strike for fair pay. twitter.com/angelarayner/s…

🎆 Another Unite WIN for truckers 🎆 “This 19% pay deal is a major victory for our members at Carntyne Transport who led the fight for better #JobsPayConditions. Another example of Unite driving-up standards across the logistics industry.” @UniteSharon unitetheunion.org/news-events/ne…

Our #NHS is under threat. Time is running out to save it. Join our day of action on 26 February to stop the Health and Care Bill and tell your MP they must oppose it. #ScrapNHSBill #YourNHSNeedsYou #NHSSOS Find out how to get involved here ⬇️ unitetheunion.org/campaigns/oppo… pic.twitter.com/pL0P9vzYd0

"We all know the cost of living has hit the roof and beyond. And that’s why you’re here fighting when your employer has made a £120m profit by Wincanton and B&Q on the backs of each and every one of you." @PPatelUnite @UniteEastMids worksopguardian.co.uk/news/people/do…

MPs @ApsanaBegumMP and @johnmcdonnellMP to join strike rally of low paid @SercoGroup workers at @NHSBartsHealth. “It's time to end this injustice. It’s time to bring these workers back into NHS employment.” @UniteSharon unitetheunion.org/news-events/ne… pic.twitter.com/EatKLGoKAh