The campaign against British Airways' betrayal of Britain has stepped up a gear this week.

Campaigners across the UK are alerting BA's corporate customers and partners about BA's plans to use the Covid-19 crisis to fire its entire workforce and rehire those that survive on totally new lesser contracts of employment. 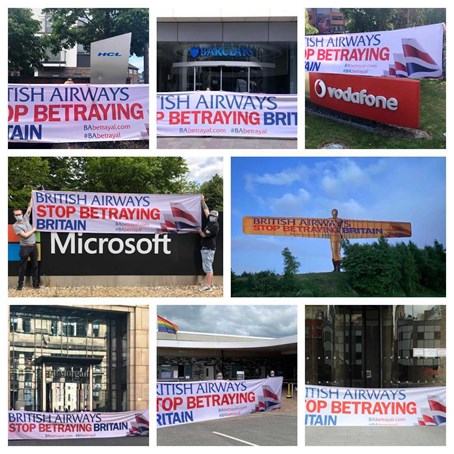 This week campaigners have been alerting companies including; HCL in Surrey, Barclays in Glasgow, Vodafone in Newbury, Microsoft in Reading, GSK in Ulverston and Publicis in London about BA's betrayal of BA staff and the British public.

Last weekend 'BA Betrayal' night time projections adorned iconic landmarks across the UK including Marble Arch, the Houses of Parliament, Harrods, The Angel of the North and the Scottish parliament.

“BA is using this health crisis as cover to impose a long-term plan to slash jobs, pay and conditions. No other employer has threatened to effectively ‘fire and rehire’ its entire workforce.

"Over 40,000 loyal BA staff now face the prospect of losing either their livelihoods or potentially being re-interviewed for their own jobs on vastly reduced terms and conditions.

“The public have responded with anger when they learn about British Airways’ plans. They expect an iconic company like BA to be working in the interests of the nation, not attacking its own loyal workforce during the worst health crisis in a century.

“Unite will continue to alert the public, BA’s shareholders and its customers about BA’s disgraceful behaviour. Our union will not stop fighting for BA workers until BA ends its scandalous actions.”