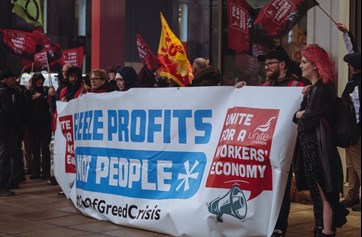 The first action taken by Unite for a Workers Economy was held in Glasgow outside Scottish Power HQ on Friday 30 September. This protest was sparked by unfettered profiteering in our energy markets symptomatic of the broken economy that only works in the favour of the richest in society.
For example:

During the build-up of this campaign, Unite commissioned a survey from Survation to learn about the difficulties facing communities during the current crisis. This survey found that within the wider Glasgow area:

Unite general secretary Sharon Graham said: “The economy does not work for workers and their families. Britain’s real crisis isn’t rising prices, it’s an epidemic of unfettered profiteering. This is why we need to build power in our workplaces and simultaneously organise in our communities. Unite will establish permanent bases on the ground in Glasgow to work with workers. Unite is driving a UK-wide strategy to help bring change to ‘heartland’ communities.”

Published in The Herald Scotland