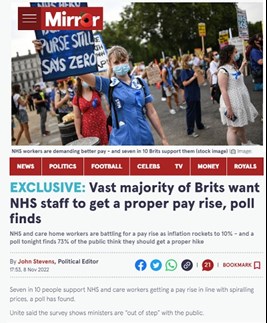 A Unite poll of over 6,000 adults, conducted by leading pollsters Survation, reveals that 7 in 10 people (73%) support NHS and care workers receiving pay rises that keep up with increases in the cost of living.

The government’s paltry pay deal for NHS workers is in direct contradiction to the will of the people according to Unite’s latest poll.

Unite general secretary Sharon Graham said: “Once again this government is way out of step with public opinion. There is overwhelming support for NHS workers who are about to embark on a major battle for fair pay in the middle of a cost of living catastrophe.

“NHS workers made huge sacrifices during the pandemic, the public haven’t forgotten but Tory ministers conveniently have.

“The blame for the funding crisis which is destroying services and leaving workers struggling to make ends meet lies squarely with the government.”

The UK’s leading union, Unite, representing some 100,000 NHS workers has announced that it is preparing strike ballots across more than 60 Trusts and Boards across the UK. Unite members in the NHS across England and Wales are set to join ambulance service members across Scotland and England in voting for action to raise pay and save crumbling services.

Unite National officer for health Colenzo Jarrett-Thorpe said: “It is enormously heartening that the public support the demands of NHS workers for a decent pay rise that meets the rising cost of living.”