Unite for a Workers' Economy

The Co-op is an employer that publicly states ‘it is a different kind of business.’ Sadly for our Unite members, they have experienced a business that fails to recognise the current cost-of-living crisis while at the same time attacking their workers’ terms and conditions of employment.

The Co-op can and should do better. We urge you to add your name to the petition and also ask your MP and MSP to support the following EDMs. It’s time for the Co-op to live up to its stated values of solidarity, democracy and equality.

Defend the right to strike in Crawley 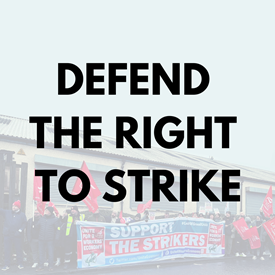 The government wants to make it harder for workers to negotiate better pay and conditions by attacking our fundamental right to strike.

Workers across six sectors are being targeted in the Strikes Bill, including transport and health. This is an unprecedented attack on the right to strike across the entire country.

For towns like Crawley, where a large proportion of residents work at Gatwick Airport, this represents a threat to the civil liberties of an entire community. Unite for a Workers’ Economy is bringing together workers and the wider community to defend the right to strike in Crawley.

Sign the petition to Crawley’s MP and get involved in the campaign here.

CAMPAIGN UPDATE: We say no to crumbs - Workers will "not be broken or beaten by Rishi Sunak" says Unite's Sharon Graham - Sunday Mirror - 1 January 2023 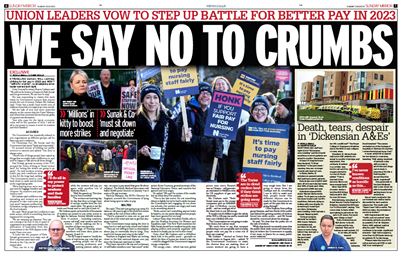 Struggling workers WILL continue striking for fair pay in 2023 and WON’T “settle for crumbs”, a campaigning union leader warned. Unite General Secretary Sharon Graham said: “We will not be broken or beaten by Rishi Sunak and his government. We are here to stay.” She was referring to planned anti-strike legislation and speculation that unions were set to run out of money.

Defiant Ms Graham added: “ Unite has a strike fund worth tens of millions of pounds, it is topped up every month. All the talk of new and more powerful attacks on the unions that the prime minister and others have promised shows they are guilty of a grand miscalculation. Just who pays for the latest economic crisis will be the question of 2023." Read the full Sunday Mirror story

Why Ofgem is failing and needs to take action

The companies responsible for bringing electricity to UK homes have been accused of “rampant profiteering” by a leading union that is calling for the energy regulator to cap their earnings.

#WorkersEconomy  #CostOfGreedCrisis -  Find out more in the Unite campaign update

About the Unite for a Workers’ Economy campaign

From workplace to community, the Unite for a Workers’ Economy campaign is driving a UK-wide strategy to help bring change following the failure of politicians to act. With the aim of collective action, the Union now looks to drive this country’s political agenda instead of commenting on it. This is more than mutual aid. It is the potential for agitation, mobilisation, and for campaigns that organise communities — led by people for the people.

Join Unite as Britain and Ireland’s biggest union focuses on building popular, working-class power to change the system that is rigged against us.

Our economy isn’t working for anyone but the wealthiest people and the biggest corporations. The very workers who kept our nation running throughout the pandemic face a cost of living crisis, while the 1% reap the rewards of our labour. Working people didn’t create this mess, and yet are being called to accept low wages amidst rising prices as corporate executives make record profits. “Our economy isn’t working for workers, only for corporate Britain and its rich backers. It’s time for workers and communities to fight back.” – Sharon Graham.

See how Unite is delivering on jobs, pay and conditions for workers across the country

From workplace to community Unite is driving a UK-wide strategy to help bring change to ‘heartland’ communities following the failure of politicians to act. With the aim of unifying collectivism at the workplace and within local communities, the union will now look to drive the political agenda as opposed to commenting on it.

This fight is about the workplace, our families, communities and the power of a united working class. We stand with workers taking action and will organise support on the picket lines, we will help mobilise in our communities to equip people to fight back against cuts.

The ground is there for us to build on, and we’re just getting started. Unite for a workers' economy. Join our movement - sign up to the campaign today.

Check out these recent updates and news stories highlighting the Unite for a Workers' Economy campaign in action and join our movement - sign up to the campaign today.

Check out the links below for the latest campaign news updates as well as all the news on Unite's wins in the workplace. Join our movement - sign up to the Unite for a Workers' Economy campaign today.

Unite For A Workers' Economy - Crawley

Unite For A Workers' Economy - Grimsby

EVENT: Details and coverage of the Unite call for lower energy prices

Call for action - Back the Co-op  strikers | Email your MSP

Use this handy tool to email your MSP and ask them to support the Co-op Funeralcare workers currently in dispute over pay, terms and conditions. Simply enter your postcode and an email with sample text will appear.

Ask your MSP to support the Co-op strikers

Live in Scotland? Then please ask your MSP to back the Co-op strikers