Stand up for democracy – oppose the Elections Bill

The Elections Bill is said by the government to be designed to strengthen the integrity of the electoral process. But the reality is that it will impact on the right of trade unions to campaign politically.

It will undermine our democratic traditions and make our elections less fair.

By restricting what 'third parties' such as trade unions can spend on political campaigning, the government is using the Bill to undermine the right to freedom of speech and association and the independence of trade unions, including reducing the ability of unions to campaign politically on a wide range of issues, including against the far right.

Trade union money is the most transparent in politics – it's members giving a few pence a week – unlike that of wealthy individuals giving millions to parties to further their own interests.

Unite believes that the Prime Minister is using the Bill to rig the electoral system against working people, denying them a voice at the ballot box through their trade unions.

We believe that society should encourage political engagement by working people, not treat them as a malevolent force.

This is why we're asking members to act now and write to your MPs to demand they oppose this Bill.

You can do this using our email action tool.

We need to spread the word about the dangerous attack on democracy that this Bill represents.

We need to spread the word about the dangerous attack on democracy that this Bill represents. 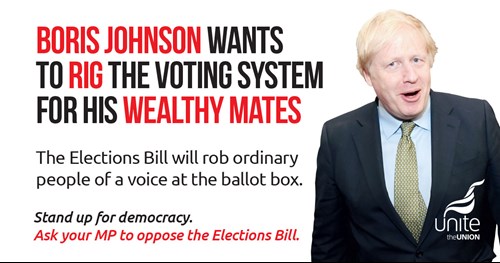 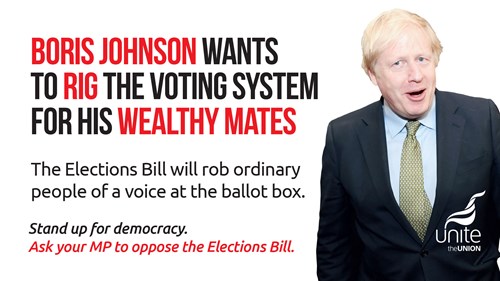 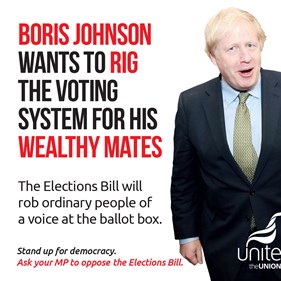