The UK is a very wealthy country, but millions of people rely on food banks to make sure that their children get a square meal, many in work. 11 million of our fellow citizens are living in food poverty. Every day for them is a choice between eating and heating, or eating and a warm coat for the kids. Something is very wrong.

It's time that the #RightToFood became law.

This law make the government responsible for addressing the raging income inequalities and the broken benefits system which have pushed so many into poverty. It would force the government to scrap its cruel five week wait before a claimant receives a penny of Universal Credit, a main reason why people are forced to turn to food banks.

And much as Marcus Rashford has been a hero for his work to make sure hungry children are fed during the school holidays, it really ought to be something that government has to do by law, not through public shaming. That's why Unite is supporting the campaign led by Ian Byrne MP to make the #RightToFood law.

Unite is now working with our network of councillors to get more local authorities to commit to #RightToFood status.

You can read more about Ian's campaign and the #RightToFood pledge here.

A national strategy for food

Unite supports the call for the ‘Right To Food’ to be incorporated into the government’s ‘National Food Strategy’. This is the first independent review of England’s entire food system for 75 years and it must take the opportunity to build the food system this country needs for all its people. It's set to report to the government this year.  Help us make sure that tackling this country's chronic poverty is top of its agenda.

Six ways to get involved

Please get involved in the #RightToFood campaign. Showing your support is easy:

#1 Add your signature to our #RightToFood campaign pledge

Sign and share the petition calling on the Prime Minister to put the Right to Food into UK law. You can also download the paper petition below to take into your workplace to get colleagues to sign.

Please contact your MP today, using the tool box and model email below, to ask them to sign the petition.

Ask your MP to sign the petition and make clear representation to the Prime Minister to include the Right To Food in the government’s forthcoming White Paper to be published in response to the National Food Strategy.

Ask your MP to sign the petition to the Prime Minister

Ask your MP to sign the petition to the Prime Minister

Please speak to your local councillors about using the model motion below to get your local authority to commit to #RightToFood status.

#6 Tell everyone that you're backing the #RightToFood

Please share our graphics on all your social channels with #RightToFood 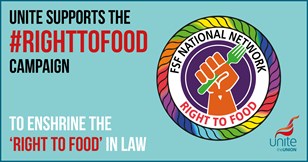 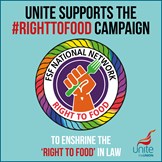 “We will not sit back and watch as this Government runs down our health service. “This strike vote reflects the fact that ambulance staff have been left with no choice but to take a stand for the very future of the NHS itself.” @UniteSharon independent.co.uk/news/uk/nhs-un…

“This is a landmark decision which has secured the long-term future of the plant. “This announcement vindicates the hard yards that Unite has put in to ensure substantial new investment at Halewood.” @UniteSharon unitetheunion.org/news-events/ne…

“Our members at 2Gether are struggling to make ends meet. But the company is refusing to give these low paid workers a pay rise that reflects rocketing prices, despite being able to afford to. This is not acceptable to Unite.” @UniteSharon unitetheunion.org/news-events/ne…

“Mizkan is a very lucrative multinational company that could easily make a fair pay offer to its workers at the Rochdale factory but it has chosen not to. Mizkan’s actions are all about the greed for profit and not the needs of its workers.” @UniteSharon unitetheunion.org/news-events/ne…