The dispute, which began in 2019, is a result of the scaffolders not being paid in line with the National Agreement for the Engineering Construction Industry (NAECI). The 62 workers have been on continuous strike action since Monday 4 October 2021. The rates for the workforce are currently 10-15 per cent (depending on specific roles) below these rates. The workers maintain 500 scaffolding structures at the British Steel site.

Join the protests on Monday 24 January 2022
From 11:30-13:30 join Unite activists at four Actavo sites across the UK and Ireland as they come together to demand that Actavo ends the dispute and meets all of Unite's demands. It's time to #PayTheRate Actavo.

Thousands of people signed our petition calling on Actavo CEO Brian Kelly to respect national agreements and pay his company's scaffolders the agreed rate for the job. Over 14,000 people showed solidarity with these workers when it's been sorely needed. They're still out on strike, fighting tooth and nail to stop this shameful attempt to erode workers' pay for greater profits.

Such a huge display of online support for their cause made a big difference to them and it piled the pressure on Brian Kelly and Actavo when we took all 14,000+ names direct to their HQ in Wakefield.

And if you couldn't make it to Wakefield on 22 December, please help push out the petition to friends and colleagues via email or social media. Every name on the petition represents more pressure against this race to the bottom on pay. 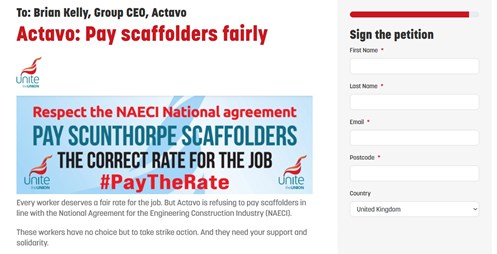 Striking scaffolders employed by Actavo at British Steel in Scunthorpe are demanding that they should be paid the rate for the job. Their employer Actavo currently pays between 10 and 15 per cent below the NAECI rates, it’s time for Actavo to #PayTheRate. ➡️ Sign the petition to Brian Kelly, Actavo Group CEO: Pay scaffolders fairly add your name today. Striking Scunthorpe scaffolders to hold march as fair pay battle continues ➡️ “The strike is already causing considerable disruption on the British Steel site, In order to resolve the strike then Actavo needs to return to the negotiating table and agree the correct rate of pay for our members.” - Unite regional officer Richard Bedford Disruption expected as scaffolders at British Steel in Scunthorpe announce strike action over pay ➡️ Workers picketing gates A, D and G from 05:30 – 09:30 every day until the dispute is resolved

“The @BritishvoltUK factory is the kind of stimulus local economies and the UK’s manufacturing communities need to achieve Britain’s net zero carbon targets. Unite looks forward to helping ensure the success of the factory.” @SteveT_Unite northumberlandgazette.co.uk/business/gover…

"The world class workforce at Airbus Broughton expect and deserve a fair pay increase. Any pay award must reflect the current rate of Inflation and the impending cost of living crisis." @tonybhoy63 @UniteWales itv.com/news/wales/202…

“Any attempt to intimidate current and former workers taking a stand on systemic mistreatment will not be tolerated. We will represent all Unite members fully against efforts by a multimillionaire @BrewDogJames to silence them.” @BrySim88 @FairHospitality theguardian.com/business/2022/…