Have your say on NHS pay

A message to Unite health members on Agenda for Change (AfC) in England and Wales.

Your voice matters. It’s time to be heard.

The government’s 3% pay rise for NHS (AfC) staff falls well short of what we know our NHS heroes our worth.

So from the 16 August to 3 October, we’re giving YOU and every one of our NHS health members in England and Wales a chance to have a say on the government’s pay decision in an online consultative ballot. This is your chance to make your voice heard.

We believe our NHS heroes deserve better than 3% so Unite and your health committee is asking members to reply ‘NO’ to the government’s 3% pay rise and ‘YES’ to action when the ballot opens.

Things you can do to get ready:

You can use the online form below to automatically send a letter to your MP.

Our NHS heroes have risked their lives to save ours during the Covid-19 crisis. Many have seen their real term wages fall by 19% because of Tory austerity. They spend locally. A decent pay rise for NHS staff is fair, necessary and affordable.

Use the look up tool to find who your MP is and send them a message. Don't worry if you're not an NHS worker, you can still send your MP a message, just remember to adapt your message.

Unite believes the 3% award is grossly inadequate and is too little and too late after all trade unions have been asking for an early and significant pay rise since July last year and Unite has been asking for £3,000 or 15% whatever is greater.

It's time the UK government stopped treating NHS workers and their unions with contempt, and paid you fairly.

We still want to know:

1. Whether the NHS pay award will be fully funded and not have to be met from existing NHS budgets

2. Will health workers employed by non NHS employers like contractors, outsourcers and wholly owned subsidiaries be given the fund by the Government for their pay award?

3. Will there be funding to ensure that the NHS Pay is above the Citizens UK living wage?

Believe it. You've earned it.
Here are five reasons why all NHS workers deserve a fair pay rise. Spread the word.

1.You’ve earned it – NHS workers have battled on the Covid-19 frontline, worked over a million hours of unpaid overtime and risked your lives to save ours. You deserve better than 3%.

2. We can afford it – This government has spent billions of taxpayers' money on failing contracts, so we know it can afford to do better by our NHS workers.

4. You spend locally – A proper NHS pay rise will help our communities recover. Giving NHS staff a substantial pay rise will boost spending in every community in every part of the UK, providing much needed revenue for our country’s struggling shops and restaurants.

5. Too many healthcare workers are leaving – Forced out of the job you love because of low pay, stress, long shifts and the treatment you received during Covid. Overstretched and undervalued, you deserve so much better than this.

Talk to your rep about ordering a supply of FAIR PAY FOR NHS printable materials. Available from the Unite print tool. Download posters below.
Get active on social media – share our graphics.
#WithNHSStaff #FairPay

Show your support for NHS staff by sharing these images on social media. 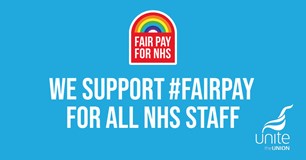 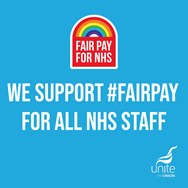 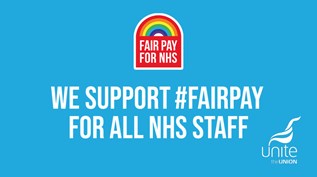 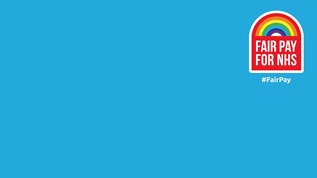 Put up a poster

Have your say on NHS pay - put this poster up on your noticeboards!

🌟 UNITE WIN FOR DRIVERS🌟 Co-op HGV Drivers secure inflation-busting pay increase ✊ "This is an excellent result for our driver members at the Co-op and demonstrates what can be achieved through negotiation when workers are organised." @UniteSharon unitetheunion.org/news-events/ne… pic.twitter.com/EAT82aqJeD

"We believe that this is an industry leading increase and in the circumstances is a remarkable turnaround from an employer who was determined to give nothing" – Dougie Maguire @UniteScotland #JobsPayConditions dailyrecord.co.uk/news/local-new…

We're in the QA session with the GS now. @UniteSharon going into more detail about her manifesto, particularly on equality commitments, the role of combines and a joined up industrial strategy, including how to drive it through in all our nations. #UPC2021 #JobsPayConditions pic.twitter.com/EtZqzk2tyU

.@UniteSharon sets out to delegates the aim of her new Democracy Commission to deepen lay member involvement in Unite. #UPC2021 #JobsPayConditions pic.twitter.com/YwmPW1bg4p