"In our time of need it has been working people who have kept this country safe and supported. The vulnerable and the lowest paid have paid the highest price during this pandemic. The government should support them and respect them, not take away their basic rights."
Len McCluskey, Unite general secretary

Rising unemployment, a public health crisis, rampant rates of the coronavirus, an appalling loss of life among our citizens and the worst economic outlook for over 300 years.

You would have thought that the government has enough to be dealing with.

But no, the Conservative party has chosen this time of fear and crisis as the moment to 'review' the rights of working people.

Time and again, Boris Johnson swore that his government would never do this. Then ministers said that there were no plans to do this and eventually, shamed into coming clean, they admitted that they were looking to review the rights of workers in this country.

This could mean that working time protections are removed, meaning longer days, lower pay and diminished rest and family time.

"To lose the Working Time Directive means we're at the mercy of the company. Everything is already being pushed and pushed - it is only the working time limit that protects workers."
Jo, bus driver, London

The workers of this country have been the heroes during this pandemic. From the NHS to the warehouses, schools to supermarkets, public transport to power supply, it has been working people who have put their shoulder to the wheel to keep this country fed, supported and safe.

Bad employers are already using the cover of Covid-19 to opportunistically strip away workers' pay and conditions without any reproach from the government.

You deserve so much better than these threats to your pay and living standards.

"You can't safely drive a bus in London or other busy city for 12-14 hours a day. Already bus drivers only get a minimum of 9.5 hours rest between shifts. To cut this further will destroy health and family life."
Jo, bus driver, London

Unite is working with unions across the country to tell the government to think again. We also know that the good employers that we work with see stability, investment, skills and a coherent industrial strategy as central to the renewal of the economy, not an assault on the basic rights of working people.

The minister with responsibility for this review, Kwasi Kwarteng, has dismissed the workers of this country as among the 'worst idlers' in the world.

It's a disgraceful slur and gives little confidence that this 'review' can be trusted.

Your union is going to fight to defend your rights but to win we need your support with this.

Here's how you can help:

Share the memes below. Let's get them out to as many colleagues, friends and family as possible. 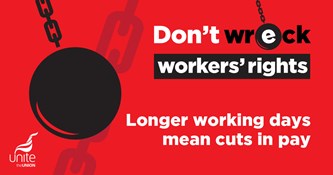 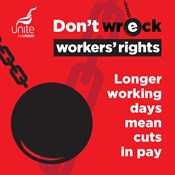 Tell us your story so that we can share it, anonymously if you prefer.

Write to your MP

Write to your MP

The timeline of Boris Johnson's many promises on workers' rights

Whenever challenged to show that his government and party can be trusted on workers' rights, Boris Johnson likes to talk the talk. But workers aren't fooled. As has now been confirmed, behind the scenes, his government is looking for ways to tear up basic working hours and pay protections.

3 October 2019: Boris Johnson tells MPs “we will be ensuring this country has the highest standards for workers’ rights” and claims: “It is the intention of this government to go higher still.”

17 October 2019: Workers’ rights are dumped into the non-binding ‘Political Declaration’ part of the withdrawal agreement with the EU but Boris Johnson claims: “We want the highest protections, the highest standards in this country.”

19 October 2019: The PM pledges that “whenever” the EU introduces new workers’ rights law, “even if it is in some way inferior to our own by then”, MPs will have a chance to “put it into UK law”.

22 October 2019: The truth comes out – in fact, ministers will only have to make a statement about whether new UK laws “regress” from EU workers' rights. No discussion or debate, and no way to stop these changes being rammed through.

23 October 2019: Boris Johnson again pledges the “highest possible standards”, insisting that “whatever the EU comes up with, we can match it and pass it into the law of this country.”

26 October 2019: Kwasi Kwarteng says claims the Tories will undermine workers’ rights are “completely mad” and “we will be better than our word”.

17 December 2019: The PM’s spokesman promises “the largest upgrade to workers' rights in a generation”.

19 December 2019: Boris Johnson scraps even the weak clause on protecting workers’ rights from his Withdrawal Agreement Bill. Instead the Tories promise an Employment Bill but refuse to say exactly what will be in it.

8 January 2020: Downing Street says Boris Johnson is “clear” that we will “continue to ensure high standards in the UK in areas like workers’ rights”.

3 February 2020: Boris Johnson decries the “absurd caricature of Britain as a nation bent on the slash and burn of workers’ rights”.

24 December 2020: Brexit deal agreed, the UK insists that if we diverge on rights, we could face tariffs.

27 December 2020: The PM tells the Sunday Telegraph the UK “won't immediately send children up chimneys”. he adds: “We're not going to regress, and you'd expect that."

15 January 2021: Plans to tear up the 48-hour working week leak. Overtime payments included in holiday pay and the need for firms to report working hours could be scrapped. The PM’s spokesman refuses to deny the plans have been looked at, or rule them out in future. He claims: “those policies would never be at the expense of workers' rights.” But the minister responsible for any review, Kwasi Kwarteng, takes to Twitter to deny its existence.

19 January 2021: Kwasi Kwarteng, performs a screeching u-turn. Despite vigorously denying the review only days before, he now confirms that it is under way. Businesses are being consulted. There are no plans to consult trade unions.

21 January 2021: Unite general secretary Len McCluskey writes to Kwasi Kwarteng to warn that the moves will increase inequality and insecurity and calls for full disclosure of the plans and their impact.

"There is no justification for Wabtec’s disgraceful #FireAndRehire plans. This is an abhorrence – it is undisguised corporate greed and we will oppose it all the way." @UniteSharon doncasterfreepress.co.uk/business/wabte…

"This is a multi-million pound business so it has no business paying Lerwick workers less than port workers get around the UK. Unite is challenging this all the way and our members have the full backing of their union": @UniteSharon @UniteScotland unitetheunion.org/news-events/ne…

How are you coping with the #CostOfLivingCrisis? Have you had to cut back on essential items like food or heating? Tell us your #CostOfLiving story via the link below and help us build for the 18 June London demo. #DemandBetter unitetheunion.org/campaigns/we-d… pic.twitter.com/oIMsUO981I