The bin dispute which began in January has now ended with a pay rise for the drivers worth up to 12.9 per cent, which is worth an estimated £3,600 per year in their pay packets. The deal also includes Christmas bonuses worth some £4,000, and disciplinary charges against Unite shop steward Pete Randle have been dropped. Read the full story - Six month continuous strike action ends in victory for Coventry bin drivers

On strike for pay justice!

Coventry HGV refuse drivers have been on an all-out strike since 31 January 2022 in a dispute over low pay. The workers’ basic rate of pay begins at just £22,183 per annum, which is far below the pay rates of neighbouring councils and that of the hired agency drivers the council is using to break the strike. Over £2.8 million has been wasted by the council in their bid to break the strike. The fact is it would take just £300k to resolve. We urge Coventry city council to #PayTheRate and reinstate Unite Lead Rep Pete Randle with immediate effect.

Account details for the dispute fund are above – all donations greatly appreciated. +++ Please donate to the strike fund +++

Thanks to everyone that came to the rally & march through Coventry on Tuesday 3 May. Coventry bin strike – demanding fairness, dignity and respect! Coventry council is still refusing the reasonable pay demands of striking workers in Coventry who earn a basic rate of just £22,183. Unite members on strike are demanding to be paid the market rate, a demand that residents in Coventry support according to a recent poll. Refuse vehicle drivers in Birmingham earn up to £5,500 more than those in Coventry, it's time for Coventry council to pay the rate.

Watch the following key speeches from the rally held in Coventry town centre on Saturday 26 March 2022.

Hear from the workers

Strike action was a last resort. It was only after nearly a year of negotiations to secure a fair wage going nowhere, that our members voted to strike. This is why.

Strikes have intensified from Monday 31 January, with workers taking ‘all-out’ strike action from Monday to Friday each week. The strikes are scheduled to continue until Wednesday 23 March. An overtime ban is also in place.

Unite general secretary Sharon Graham said: “Coventry council has had every opportunity to resolve this dispute through negotiations, yet has still failed to table any offer to resolve the industrial action. The council’s failure to negotiate has left Unite with no alternative but to escalate the strike action.” 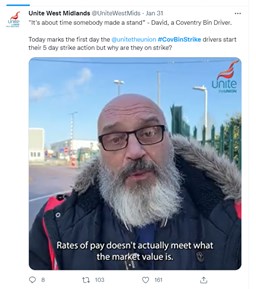 The failure of Coventry council to tackle low pay rates for its refuse collection drivers has resulted in strike action over pay and working conditions. The drivers who must hold a HGV licence, are paid as little as £22,000 per annum.

“Why not pay the rate for the job and end the strike rather than paying out even more taxpayers’ money which won’t resolve the current stalemate?” - Read the full story here ➡️ Agency worker recruitment by Coventry council EXPOSED in bin dispute - 27 January 2022

Share these images on social media and across your networks.

Find out more by following the #CovBinStrike on social ⬇

The message is clear, back Anthony, and back Coventry's bin drivers on #CovBinStrike 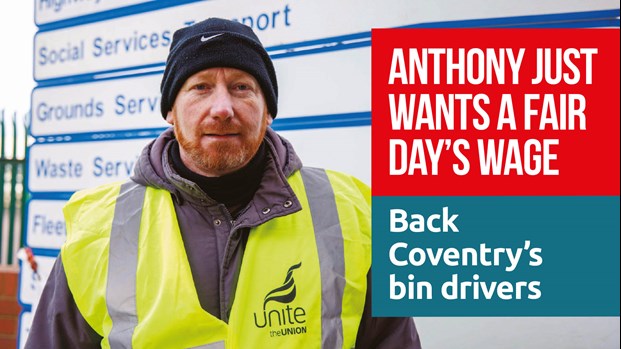 Account details for the dispute fund are above – all donations greatly appreciated. +++ Please donate to the strike fund +++

Read some of the selected press coverage of the Coventry bin strike. The dispute would take just £300k to resolve. Coventry city council should #PayTheRate and reinstate Unite Lead Rep Pete Randle with immediate effect and it can bring an end to the bad publicity the council is receiving for its union busting actions.